The Crowther family were born in Golcar, their father was a clothier born in1820 he died in 1865. He married Martha and they produced a large family four sons and four daughters. The sons Joseph, William, Elon and John Edward all became very successful Woollen cloth manufacturers, and also had many other businesses. 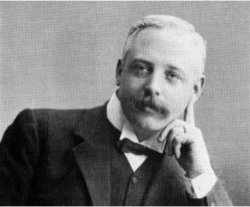 John Edward Crowther born in 1863 was to have a major impact on the village of Marsden until his death in 1931.

The Crowther brothers moved to Marsden in 1867 and so began a long association with the Crowther family and the village of Marsden, which continues to this day. Sadly Bank Bottom Mill closed in the summer of 2003. The mill was to continue to expand in the early years, and at one time was one of the largest cloth producing Mills owned by one man (John Edward Crowther) in the world. This is not difficult to imagine when you consider the size of Bank Bottom Mill the floor space was 57,592 square yards it has forty three sets of carding machines and six hundred and eighty looms in production in the 1920s 30s and 40s.

The textile company at Bank Bottom Mill was known has John Crowther and Sons, so named after their late father, a woollen manufacturer who had a small business in Golcar in the early 1800s.

Joseph, William and Elon were to continue production at Bank Bottom until 1871. When William and Elon moved and established a separate firm at Fall Lane Mills called W and E Crowther. Within three years they were to move this time to Crimble Mill in Slaithwaite. This left Joseph to continue the management at Bank Bottom alone until 1885. When John Edward the youngest of the Crowther sons entered into partnership with Joseph, this was after working at Bank Bottom Mill with the help and guidance of Joseph while a young man.

The successful partnership was to change when Joseph and two of his sons moved down the Colne Valley, to Milnsbridge after purchasing two Mills. And in the course of time this was to lead the way to many other successful business ventures. Including Globe Worsted and Slaithwaite Spinning Company.

Joseph and John Edward in 1901 were to make changes to the name of the company Joseph was to take the company name of John Crowther and Sons. And John Edward now in sole control at Bank Bottom was to call his business Marsden Mill Co Ltd.

John Edward Crowther was to eventually employ over two thousand people, his business continued to prosper.

All the Crowthers brothers Joseph, William Elon and John Edward were to become very successful within Textile Industry owning many Mills in the Colne Valley and beyond.