The pathway at Gatehead became inadequate for wheeled traffic and was by-passed by Meltham Road being extended to connect with Brougham Road. This road was originally called Idle Row and the cottages which gave it this name still stand opposite the mill. 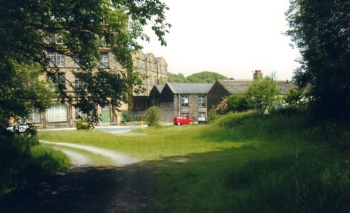 The large car park on the right hand side this row of old cottages was called Goodall's Yard and was the site of an ancient hostelry called The George and Dragon which was built as a coaching inn with stables around 1740 - some 30 years before the building of the first Turnpike road but indicating that the way into the village was well used from an early date.

The business was clearly important to the commercial life of the village judging by the surviving records.

Invoices in the West Yorkshire Archives dating from 1819 show that they bought their meat, gas and corn from Marsden traders but went further afield for a wide range of other goods. Nutmeg, cinnamon, ginger and pepper came from George Hall, Chemists and Druggists of Kirkgate in Huddersffield, beer from the Lockwood Brewery, coal from Beeston Manor Iron and Coal Works and soap from Cannock. Spirits, tea, coffee and other groceries came from Huddersfield dealers. An invoice from, Benjamin Holroyd, dated 1849 lists, 9 Mutton 6s, Beef £1.16.9d., 63 Veal £1.13.4d., he charged for the slaughter of the animals but gave a rebate to allow for the value of the cowhide and tallow which he sold. 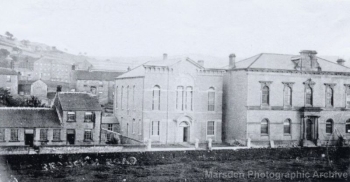 In 1820 interviews were conducted to appoint the first master of the New Town School which was adjacent to the inn. Following the appointment of Joseph Webster the three candidates were treated to a meal of cold roast beef and tea at the George and Dragon. The landlord at the time was John Kershaw who described himself as a joiner. His will dated 1834 includes "All that Inn or Public House situate in Marsden known as The George and Dragon and the Stable, Outbuildings, Closes of Land and Appurtenances thereto belonging and now in the occupation of Richard Goodall". The building was converted into four cottages which were demolished in 1935 as part of the Marsden ImprovementPlan.

Richard Goodall, born 1799, came to Marsden to work as the head stableman at the George and Dragon and married the landlord, John Kershaw's daughter. After a few years he became the licencee. When the 1839 Turnpike road was planned (the present day Manchester Road, A62) he built the British Queen on the corner of Peel Street and Manchester Road.