The Hare and Hounds 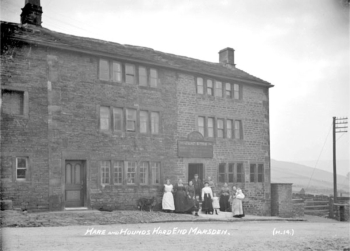 The Hare and Hounds

The turnpike road continued up the hill onto Mount Road where the first inn is The Hare and Hounds built in 1816 and known locally as The Shifters. It was kept for many years by Betty Shaw.

Picture of hare and hounds

During a period of reservoir building in the 1890s there were large numbers of navvies frequenting the pub. They took umbrage when the landlady, Betty Shaw, raised the price of a pint of beer by a ha'penny. The story goes that they decided to take matters into their own hands. They dragged a disused wooden cricket pavilion all the way from Slaithwaite and planted it on Old Mount Road to provide them with their own beerhouse. The site is still occupied by a licensed club known as The Cot.

Joshua Tetley bought the inn in the early 1900s. The Hare and Hounds closed in 2002 and the building has been converted into residential accommodation.