The evils of alcohol

The preamble to a 1736 Act stated "The drinking of spirituous liquors or strong waters is becoming very common, especially among the people of lower or inferior rank, the constant and excessive use thereof tends greatly to the destruction of their health, rendering them unfit for labour and business, debauching their morale and inciting them to perpetuate all manner of vices."

In 1787 a proclamation sent to every magistrate noted "swarms of petty pothouses... haunts of idleness and seminaries of crime". Magistrates ruled against cockfighting on licensed premises, tippling during divine service, harbouring of vagrants and breaking of gaming laws. 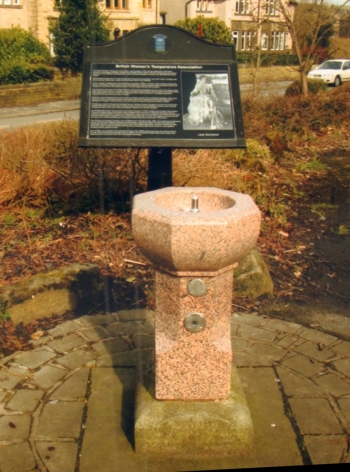 The Victorians and Edwardians were much involved in spreading the notion of abstinence from alcohol and founded the Temperance Society to promote their ideals. Marsden had its own branch of the British Women's Temperance Society and, in 1929, raised the money to erect a drinking fountain in the park so that people could quench their thirst on water rather than the evil alcohol. The branch was still active in 1940 when a meeting in the village reported that brewers were able to buy unrestricted amounts of barley whereas feed stuffs for pigs were in short supply which could cause a shortage of bacon.

It was common for children to be persuaded to sign the pledge. A young member of the Adult School Union described his experience as 'a Son of Temperance'. He was told of the evils of strong drink and, in a burst of fervour and enthusiasm, and to the accompaniment of a dozen young voices singing 'My Drink is Water Bright' he signed the pledge. He went on to say "Not knowing the merits, evil or otherwise, of this dreadful commodity, curiosity got the better of me".

Despite obsessive research some mysteries remain. The 1841 census shows four licenced premises in Towngate but only three, The Two Dutchmen, The White Hart and the Ram Inn can be positively identified. It is possible that Roger and Anna Logue's house at 3 Towngate may be a contender. There is an old brew house attached to the rear or their property but there was also a brew house in one of the three old cottages opposite the Ram Inn at the top of Towngate and brewing equipment was owned by Luke Marsden who lived in a now demolished building at Bridge End. There is also the problem of the date stone for The Two Dutchmen.